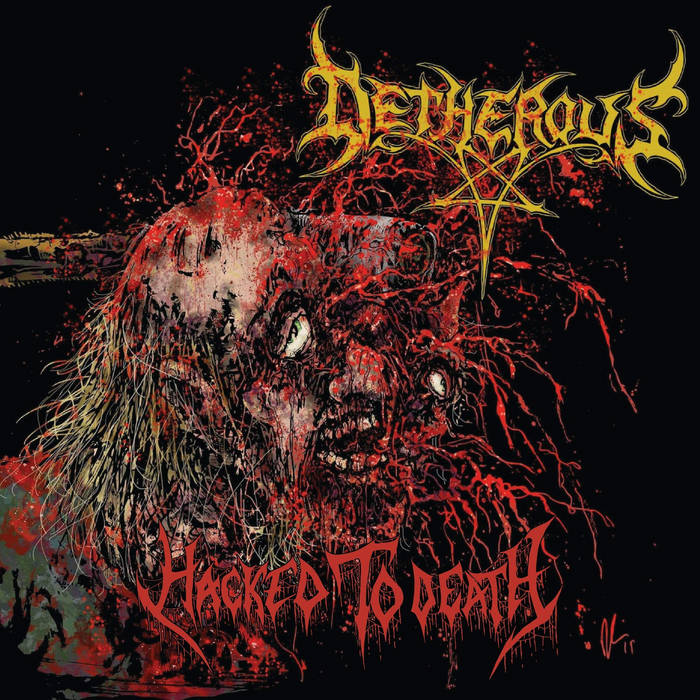 corpse_under_glass It's Demolition Hammer's bastard son! I love it! Definitely one of my favorite releases of 2019! Favorite track: Smouldering Ashes.

Wolflust CD arrived today .. Awesome music from a new favorite band of mine .. I Can't wait to what the will do next .. Top shelf death / thrash metal .. Check them out!!! Favorite tracks ... 1 through 8. 💀 Favorite track: Smouldering Ashes.
more...

Detherous are 4 Death Thrash Maniacs from Calgary Alberta, Canada. On their debut album, Hacked to Death, Detherous have created an absolutely blistering album spanning 8 intense songs made up of old school Metal mayhem!

"Detherous belies their tender years with a ripping vortex of bludgeoning speed. Although it’s evident that the band was weaned on the cornerstones of the 1980s underground – Slayer’s dramatic apocalyptic time-changes and early Sepultura’s punk-like intensity are evident – they dig deeper and it shows. You can hear the intensity of Demolition Hammer and the grandeur of Asphyx with the hint of creeping death in MacDonald’s sooty grunt."
- Invisible Oranges
www.invisibleoranges.com/detherous-hacked-to-death-premiere/

"With an album named Hacked To Death and blood-spattered, head-cleaving cover art, you would expect the music to be… slaughtering. And this debut full-length by the death/thrashing Detherous is indeed packed with full-throttle rampages and fueled by a riotous, take-no-prisoners spirit. But this fearsome foursome from Calgary, Alberta, Canada do a whole lot more with their music than slash and burn. They’re adept at creating sensations of mania and mayhem, but the music is also adventurous, and full of surprising twists and turns."
- NO CLEAN SINGING
www.nocleansinging.com/2019/07/18/an-ncs-premiere-detherous-ridden/

“There is absolutely nothing as satisfying as old school Thrash and Death Metal. Like a ravishing hunger fueling a stark craving for a grilled burger with gooey cheese and bacon, musical cravings can be just as specific. Thankfully, Alberta, Canada’s Detherous deliver the goods made to order. Injecting equal parts American and European Thrash and Death Metal influences, the band forcefully wave the flag of hate!”
- Metal Temple
www.metal-temple.com/site/catalogues/entry/reviews/cd_3/d_2/detherous-hacked-to.htm

"Walking the line of thrash and death metal nicely, Hacked to Death is a chunky beast that moves at an impossible pace and has savage intentions for all who get in its way. Be careful head-banging to Smouldering Ashes rhythm, you’ll break you neck. That is how intense it is. Bloody good though, especially the slowdown section that gets really low and heavy before increasing in pace leading to one last explosion of noise."
- Games, Brrraaains & A Head-Banging Life
www.gbhbl.com/album-review-detherous-hacked-to-death-redefining-darkness-records/

"From the category of death/thrash, Detherous have a debut entitled Hacked to Death that they have created with a monstrous attack; sleek, modern sounding stuff, played with energy and relentless, pedal-to-the-floor pace....It’s good to see thrash is still alive and thriving."
- SkullsNBones.com
skullsnbones.com/detherous-hacked-to-death-album-review/?fbclid=IwAR0awzBvsvUJLpWPbLSS9ZMQOIYpmdyztCW4av5XU4REmMGgKmaXWdXY8oo

"Channeling Malevolent Creation, Death and Asphyx, Detherous have managed to create a style that’s exuberant, furious (boasting exquisite time changes and abrupt mosh frenzy changes in pace) and technical. Familiar, with nods to the fury of early Kreator and the rhythm transformations of Slayer, easily appreciated and nostalgic yet a breath of fresh air to a scene that’s recently become overcrowded with atmosphere. This is audio which unceremoniously pulls one back to the old school (both European and American) and does a great job of doing so. Call it homage, call it what you will but there’s no doubt this is executed with passion, flair and precision. This is an album which will be in heavy rotation, mark my words!"
- Cult Metal Fix
cultmetalflix.wordpress.com/2019/06/13/abrasive-audio-to-soothe-the-senses-part-16/amp/?__twitter_impression=true

Bandcamp Daily  your guide to the world of Bandcamp